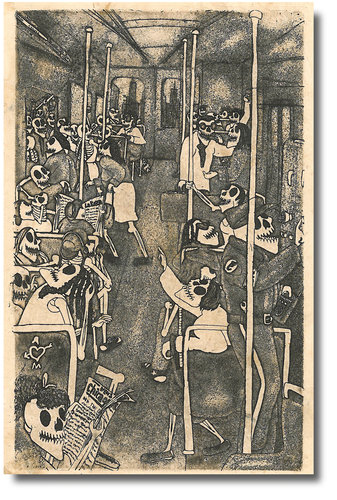 … the souls of the dead are traditionally remembered in November.

The Mexican artist Nicolas de Jesus has an exhibition at the Neuberger Museum of Art.

“The commuters in “En el Tren (In the Subway)” are an urban mix of skeletons. All are fully clothed, some sporting hats and glasses, others with dreadlocks reaching down their backs. They read newspapers whose type is nearly legible; they listen to music and engage in conversation. There’s a bit of graffiti on this train, reflections of skeletons in the car’s windows, and, barely discernible through the rear door, the city of Chicago.” (from NYT piece on the exhibit)